On Monday, May 21, my boyfriend and I sat down to watch the previous evening’s season five finale of Brooklyn Nine-Nine. I had been looking forward to this all week because of the preview Fox had given for this episode.

Rosa Diaz, played by bisexual actress Stephanie Beatriz, would be getting her first female love interest, played by Gina Rodriguez.

When Rosa first came out as bi in season five, episode 9, “99,” I literally screamed. She actually said the word bisexual! This was revolutionary.

I had seen bi characters on tv before, of course, but they never actually call it bisexuality. They call it “not liking labels” or “being open-minded,” but to actually say the word bisexual was unbelievable.

As a young bi person, I am desperate for more representation in media. To see a character come out as bisexual--and be played by an openly bisexual actress no less--means the world to me.

When Rosa came out to her coworkers, they were immediately and fully accepting. However, when she came out to her parents in season 5, episode 10, “Game Night,” they were not supportive. It is important to see both sides of the coming out narrative.

Rosa’s parents tell her things that every bi person has heard: “You can still end up with the opposite gender, so it is okay,” “This is just a phase,” and, “There is no such thing as being bisexual.” 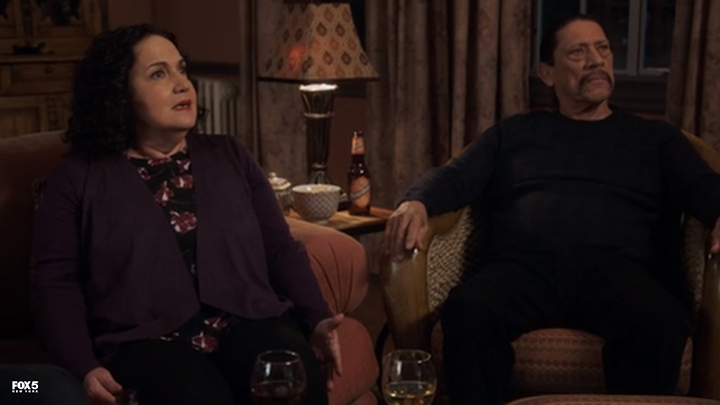 These things hurt to hear. They hurt Rosa in the show, so much so that the famously tough and inexpressive character almost started to cry, and they hurt real bisexual people who are told this over and over throughout our lives.

Rosa’s response was empowering. She demanded that her parents accept her and asserted that their claims that her bisexuality would end are untrue. She said things that every bisexual person wants to say when we are not accepted, although we are not always in a position to say them.

Seeing Rosa come out with such confidence and be true to herself in such a difficult situation was inspiring. And seeing it happen on a popular, mainstream television show was thrilling. Even more moving was what Captain Raymond Holt, played by Andre Braugher, says to Rosa at the end of that episode:

“You should be very proud of yourself. I know things aren’t exactly where you want them to be right now, but I promise you they will improve. Every time someone steps up and says who they are, the world becomes a better, more interesting place, so thank you.”

After those moving words, I did not think this representation could get any better. Rosa is not seen as sexually promiscuous, she is not a villain, and she is explicitly described as bisexual. But then Gina Rodriguez’s character, Alicia, was introduced.

We have seen Rosa in a serious relationship with a man before, and now, with Brooklyn Nine-Nine being picked up by NBC for its sixth season, we stand a chance of seeing her in an onscreen relationship with a woman, too. We already got a taste in the season finale, with Rosa describing their meeting as “what the universe wants,” although the two do not engage much in the episode.

I am beyond excited about Rosa’s representation of bisexuality, and I cannot wait to see where NBC takes her storyline. I am confident that they will take it somewhere because Beatriz herself will fight for it. As Beatriz told Vulture in a recent interview: “[Next] season, I am going to hard-core push for that. Even if it’s not Gina, we need to see Rosa kiss a girl. I want to see the circle get completed.”

I extend my thanks to Beatriz for helping to open the doors to more and better bisexual representation in media, and for her bravery in letting her own life inform the story we see onscreen.